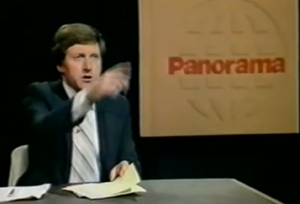 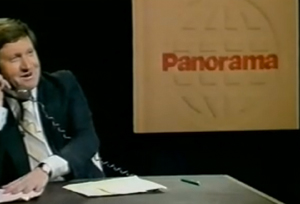 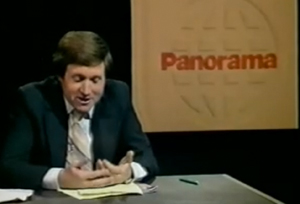 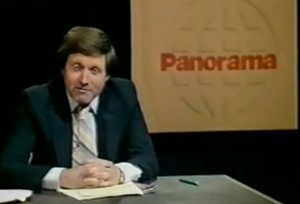 Exhibit A when people ask why TV presenters are paid so much, David Dimbleby single-handedly keeping BBC1 going for two minutes in 1976 is just as much a triumph as all the all-night election broadcasts and great state events he’s covered. It’s perhaps baffling to a modern viewer why Panorama had to be live in the seventies given the anchor basically just linked into a film, but live it was and David was thrust into the spotlight when the film on Rhodesia broke down. Moving swiftly on to the next item on the IMF, the incredulity in his voice when the anonymous voice on the other end of the phone tells him they “don’t have film of the IMF… *or* Rhodesia?” really is quite something. Hence David has to inform the nation that they’ve lost all their films and all their VTs and can’t show anything at all apart from David at his desk in his appropriately sparse set in his black void. As Clive James points out, David’s sentences then take on epic length as, twiddling with his pen and moving aside his (now seemingly useless) script, he informs us he can’t tell us any more about Rhodesia as the film doesn’t have any commentary and he can’t tell us any more about the IMF as the film is “quite complicated” (a description you wouldn’t get of anything broadcast on primetime BBC1 now) and he can’t tell us about the stand-by item on adult literacy as that can’t be shown either, so instead, brilliantly, “we sit in silence”. And indeed we do, albeit only for a few seconds (although for David it presumably felt like hours) before the phone rings again. The clips tend to fade out at that point, so we miss the further indignity heaped on David, as by this point they’d now found the film on Rhodesia and promptly run it, cutting him off before he can introduce it or even get the chance to bring this shambolic but hugely entertaining piece of television t o a suitably satisfying close. Your heart bleeds for David throughout and next time he’s being a bit of a pompous arse on Question Time, remember that one day he once had to present a television programme where literally nothing happened.