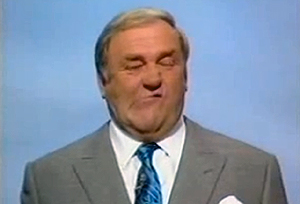 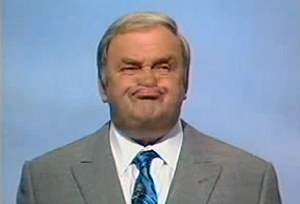 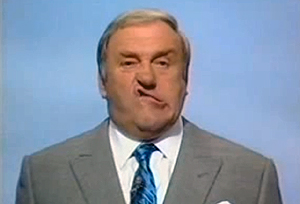 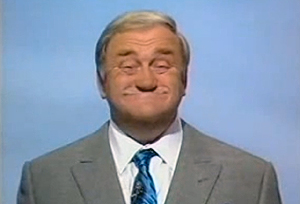 Nobody ever watched Blankety Blank because they were interested in the cut and thrust of the game, and indeed Terry Wogan once said that he always liked it best when nobody got any answers right or won any prizes because for him that summed up the whole ethos of the show, and if there was ever anything at stake they’d all have to concentrate and couldn’t mess around. Under Les Dawson, of course, that idea reached new heights to the extent he didn’t want to give away any prizes at all. Under Tel the attraction was the chat was the panellists but Les had to put up with a much lower standard of panellist – lots and lots of Gary Davies – and so the main attraction was simply him and his gags. Les used to recycle quite a lot of material but his delivery was always so amusing it never mattered, and here’s a wonderful example. Clearly this week the game had underrun somewhat so to fill a few minutes they asked Les if he could pad the show out a bit, and he obliged with one of his favourite old chestnuts about a candle. It’s an old joke but the humour relies entirely on Les’ performance and his expert face-pulling, especially when he ends up pulling several faces in quick succession and forgets which one he’s supposed to be doing. What’s great is that clearly about 90{30e2395aaf6397fd02d2c79d91a1fe7cbb73158454674890018aee9c53a0cb96} of those present had heard the joke before – there are other clips of him telling it on YouTube – but it doesn’t matter, and Frank Carson helps it along by roaring with laughter in the background, which in turn makes Les corpse and make it all even funnier. After that, the actual quiz seemed something of an anti-climax, but then it was the flimsiest format ever made and the more time there was for Les to pull faces, the better.