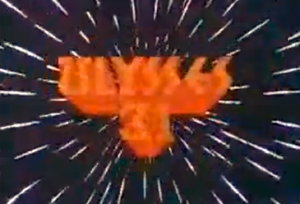 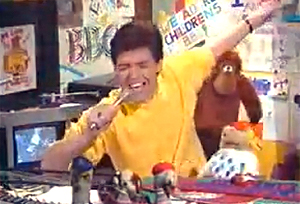 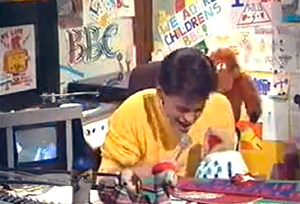 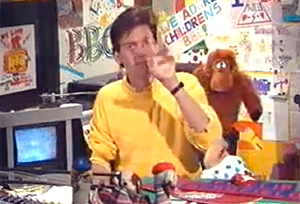 More Broom Cupboard clippage here, and another example of how the limited facilities and tiny budget ensured maximum creativity. Before Children’s BBC became a going concern in 1985, kids shows on BBC1 were introduced in the same fashion as the adult programmes by the unflappable announcers, who may have occasionally added a light-hearted comment but that was about it. But when Pip Schofield settled in as anchorman, the links could now react to the programmes, creating an added dimension. A familiar feature of kids telly for many years was the umpteen-part imported series which were often utterly tedious but with a hummable theme tune, and this Franco-Japanese epic was no exception. Pip took a shine to the theme tune and letters from Friend of TV Cream Jill Phythian suggested it was hugely popular at home, so Pip began to join in. What’s particularly amusing from a modern perspective is ho w clunky all the technology looks, Pip fading himself in and then fading out when the show starts, but it’s great how he’s totally without embarrassment and happy to mime to a TV theme while dancing with a puppet in front of several million viewers. Of course, this was just the start of it, Pip going as far as transcribing the lyrics to the similarly epic Mysterious Cities of Gold (by himself, with a tape recorder and a pen) and causally offering copies, only to be completely overwhelmed by the response, while his successor Andy Crane even performed the theme tune to Willy Fogg with a fully costumed dance routine (which doesn’t appear to be on YouTube but is fondly remembered by all who saw it). Hugely creative and innocent fun, this kind of spontaneity is rarely seen on TV these days, more’s the pity.