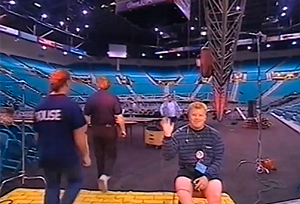 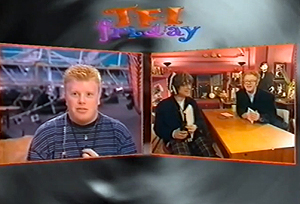 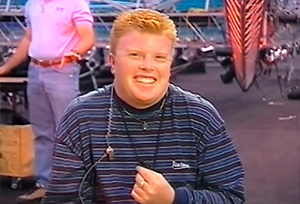 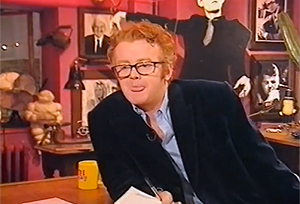 Few series went off the boil quite as quickly as TFI Friday but for the first nine months or so, like Evans’ radio programme, it was absolutely crammed with ideas and seemed to be the absolute zeitgeist. In fact the early episodes of TFI are quite different to the three-guests-and-three-bands snoozefest it later became with plenty of daft one-off items thrown into the mix. Show six happened to fall in the week that Frank Bruno was fighting Mike Tyson and Evans, who always had the knack of picking the topics everyone was talking about, arranged to interview promoter Don King in the show’s first (and, it turned out, only) interview via satellite. One slight problem was that Don King then failed to turn up in time. He was, in fact, “one minute away”. On any other show, that might have been a fatal blow, but Evans had the wit to keep things going and spotted a soundman sitting in King’s seat waiting for him to arrive, so in lieu of any better ideas, why not interview him? Hence, the hapless Shaun was invited to offer his views on the fight and the merits of pay-per-view broadcasting (the first fight to be shown in such a way in the UK, of course), plus say hello to anyone he knew in the UK (not that he did know anyone), all the while keeping us informed that King was, yes, “one minute away”. These updates on King’s whereabouts continued, at one point announcing that he was in fact only five seconds away, but funnily enough, we were then informed he was, in fact, “one minute away” again. By that point it was the end of the show so regardless of whether he actually was “one minute away”, he was too late, so that was the end of that “interview”. But in fact King had done the show a favour because we doubt King would have said anything interesting and we’d seen him before, whereas we were richly entertained by Shaun the soundman unexpectedly being thrust into the spotlight on a show he’d never heard of in a country he’d never visited. He even had his own catchphrase.