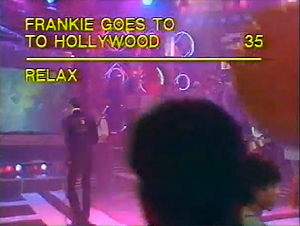 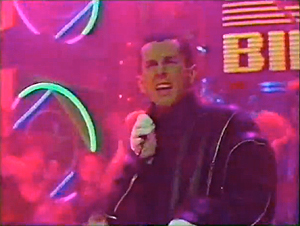 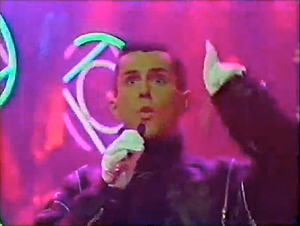 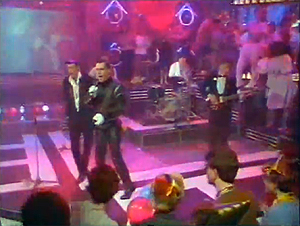 Much earlier in this countdown we featured Frankie’s sensational performance of Two Tribes on the Pops, but earlier that year they’d made their debut and become famous on the spot. Of course this wasn’t Frankie’s first TV appearance, that was while still unsigned on The Tube, which convinced Trevor Horn to sign them up. Much studio wizardry later came the finished record, although initially sales were slow. However straight after Christmas, when hardly any new singles are around, they’d managed to creep up to number 35 and, given it was a really quiet week, that was high enough to land them a Pops appearance – an opportunity they certainly made the most of. As you can see, it was a suitably festive edition to mark its twentieth anniversary, leading to even more glitter and streamers than would usually be the case and creating a real party atmosphere during what we’re suggesting is Top of the Pops’ imperial phase. The show was also broadcast live and, as well as the quality of the song, what doubtless sells it is Holly Johnson’s fantastic performance, always managing to find the right camera and looking as if he’d been doing this for years, while the rest of the band are clearly thrilled to be there and besides themselves with excitement. Thanks doubtless to the months and months of work that had gone into the marketing, never before had a band made their first primetime appearance with such assurance. The song immediately rocketed up the chart to number six, and the next morning the band told ZTT they had to start paying them properly because they now too famous to sign on the dole. Paul Gambaccini was in the studio that night and told Holly he couldn’t believe they were allowed to perform a song with such blatant innuendo. Sure enough, the song then proceeded to disappear from the Beeb’s airwaves, only helping it to sell even more copies and stay in the chart for the best part of the year. Thirty years on, it still sounds a brilliant record, but it surely wouldn’t have been such a success without this truly fantastic performance.