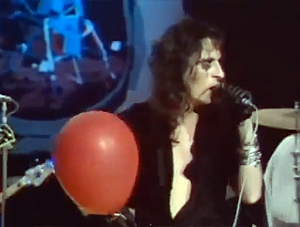 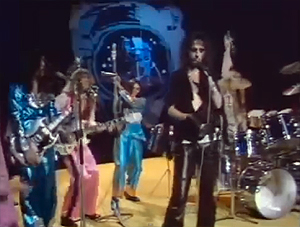 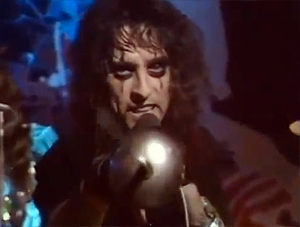 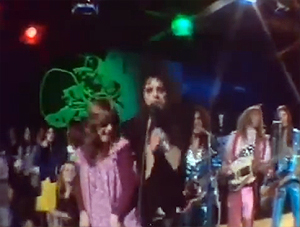 As we’ve mentioned before, we think the early eighties is Top of the Pops’ high water mark, though it doesn’t help the case of the early seventies that we’ve got so little to choose from. Indeed 1972 is so badly represented in the archive that only one episode exists in full, which is such a shame as in terms of the clips that exists it was a cracking year. David Bowie’s performance of Starman is rightly celebrated, but just seven days later came yet another hugely memorable moment, fortunately repeated at Christmas. Alice Cooper – the name of the band, of course, not just the man – made their debut while at number 44 at the charts, so this was undoubtedly the first time most people in the UK had been able to see him in action. And what a surprise it must have been, Cooper’s expert showmanship ensuring he knew exactly where the cameras were and how best to perform to make the greatest impact. The audience certainly play their part, too, and the most iconic moment of all comes when Alice grabs a member of the audience – who couldn’t look more of her time – and ends up dancing along with her. The straight face never slips but it’s obvious that he has his tongue firmly in his cheek, while the audience member is having a whale of a time as well. The fact it was performed on Pops in mid-July ensured added topicality, and doubtless it was this performance that was responsible for its rocket up the charts to number one within weeks. Like much of the early seventies Pops footage, it’s been repeated umpteen times – mostly because there just isn’t enough of it to be rationed – but every time the performance is a joy to watch, especially as we now know Alice is one of the nicest men in rock and knows exactly what he’s doing.