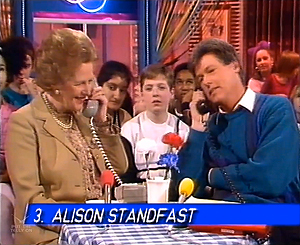 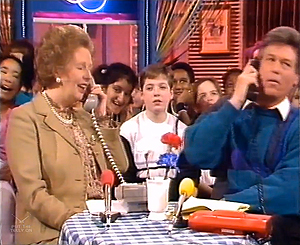 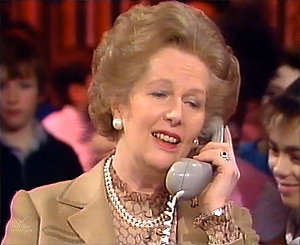 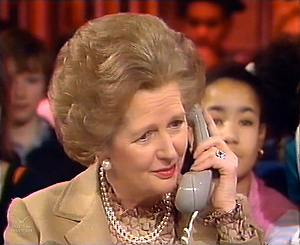 Sadly we don’t have the full version of this, but the nearest we have is this compilation of its various appearances on clip shows over the years, which at least has the happy side effect of including TVC’s Phil Norman on talking head duty for BBC4 back in 2007. Obviously we all know what happens here, but as well as the moment itself, it’s worth further study because it illustrates what a fabulous concept Saturday morning telly was in its time and why it’s a crying shame we don’t have anything like it these days. As well as Thatcher, Neil Kinnock and David Steel also made appearances on Saturday SuperStore that year (though not in consecutive weeks, as is legend, spread over a few months), which was testament to its pulling power in those days, as well as illustrating all parties’ rush to engage with younger voters, this coming in the same year as Thatcher’s memorable Smash Hits interview where she gave the current pop bands her enthusiastic patronage (“My goodness ME, we’ve got some smart ones!”). Obviously there’s the bit where she sabotages Thrashing Doves’ career but it’s the phone-in that’s the highlight. John Craven had more or less packed it in as a regular presenter but came back whenever something came up only he had the gravitas to helm, and it was he who allowed Alison Standfast to ask her challenging question. We’re always impressed in this moment how on the ball the audience appear to be, immediately realising the significance of the question, but it remains a fascinating document because it illustrates a flustered Thatcher who can’t tell Standfast to shut up or shout her down. It was the kind of question only a child could ask too, given at the time it felt like it was all very well saying there wasn’t going to be nuclear war, but how could they guarantee that? OK, so t his whole thing has been anthologised to death (the fact the clips in this link are from three different shows proves that) but in terms of its complete breakdown in protocol, and as an illustration of how big a show Saturday SuperStore was, it can’t be beaten.