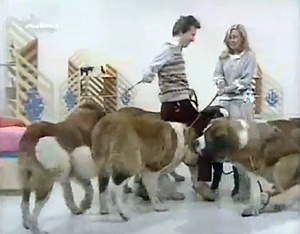 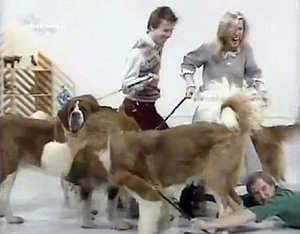 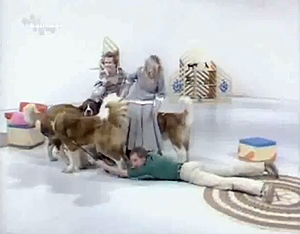 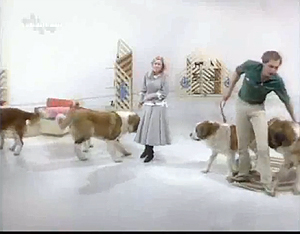 Val, John and Pete have always been cited as the ultimate Blue Peter team, with some justification, but surely a close second comes Si, Saz and Pete, especially as they managed to bring the show back to its best after the atrocious antics of Chris Wenner. They certainly continued to lineage of their distinguished predecessors – Simon Groom was clearly the Peter Purves of the trio, slightly square and unexciting but a reliable presence and with a neat line in dry humour. Peter Duncan was unmistakeably the John Noakes of the eighties – scruffy, a bit manic and overexcited but with bags of warmth and enthusiasm. And then there was Sarah Greene, like Val a true professional, appearing far too cool for the boys’ antics but clearly just as happy to send things up. Here’s the team at their brilliant best, trying to work through an item invol ving St Bernard dogs. Biddy Baxter famously heavily scripted the show but clearly hadn’t realised quite how over-excited seven large dogs might get in the studio, and the item is quickly reduced to chaos. Si’s fabulous pratfall is great fun, and while he and Sarah try and explain exactly what the dogs are doing here, they eventually get drowned out by the barking and Pete wisely decides to write the whole thing off as a bad job, and the brilliantly abrupt conclusion, where he simply promises “We’ll let you know how this goes” before they wish a hasty goodbye, is just the funniest thing. Blue Peter in the eighties had a bit of a reputation for being boring, and occasionally it was, but many kids liked that slow pace and routine. It also meant that when the odd bit of anarchy arrived, it was all the better, handled expertly by a fantastic team.